Diagrams display facts, rules and deductions and indicate what is true and false. 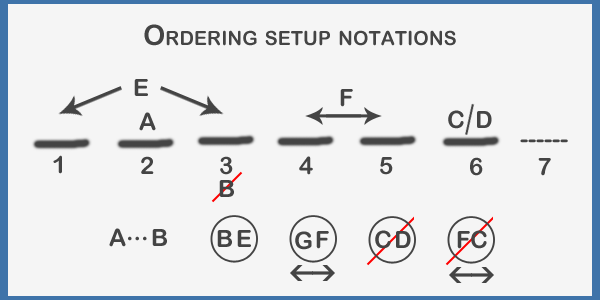 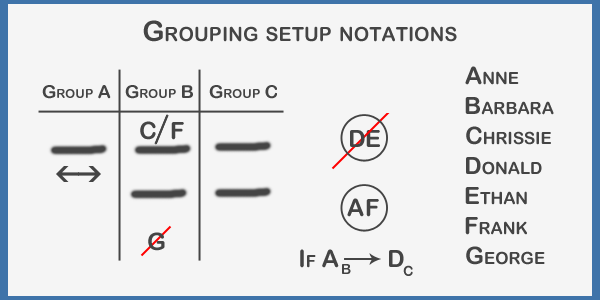 An equivalent rule is one of the fastest way make a deduction.

The conditional rule, is itself a deduction i.e Once it is affirmed that A lives with B, it can deduced that C lives with D.

Note: C could live with D, even if A doesn't live with B.

Equivalent rule: If not A then not B.

If not A then B

Equivalent rule: If not B, then A.

If Anne is not sleeping the Barry is sleeping.

If Barry is not sleeping, then Anne is sleeping.

It is often possible to make deductions from elements that appear in more than one rule.

Rule 1: Game A is to be played before game B.

Rule 2: Game B begins on an odd hour.

In mixed configurations (both ordering and grouping) the rules in the diagram should clearly reflect which of the two they are referring to.

Disregard and brush aside knowledge you may have about a particular topic in a passage. The passages have provide sufficient facts, and all outside knowledge is unecessary.

It can sometimes be helpful to eliminate choices based on rules. Eliminating choices that don't adhere to a specific rule helps avoid situations where all choices are consecutively checked against all rules.

Scenarios can be time saving when groups, and not elements, are restricted to either two or three situations that conform to all stated rules.

Suppose we want to know the order of appearance of six actors in a movie, A,B,C,D,E,F

We know that A comes before D, and that there are three actors between them.

This leaves only two possible scenarios.

This is a great way to eliminate choices. Furthermore, an extra rule, such as D appears before F would eliminate the second scenario since D cannot be last.